This is H4 subtitle of this page

Come, visit our office and see how can we be of help to your brand and business!

SIA “Leversa” was registered in October 2002 as a result of merging of two Latvian distribution companies – “Arlems” and “Vice Versa”.

However, do not think that “Leversa” does not have its own history. Our predecessors have contributed to our history.

The business of “Arlems “ started in 1993 when the company imported the first truck of vegetable oil Risso from Belgium. At the moment every fourth bottle of vegetable oil consumed in Latvia is Risso. “Arlems” has contributed its expertise in sales and marketing of FMCG.

SIA “Vice Versa” was established in 1993 and served Latvian food producer “Kok Group” as a distribution company. Its success is realized in having a leading position in Latvian ketchup and mayonnaise market under “Kok”brand name. “Vice Versa”has contributed its expertise in logistics and sales.

In October 2002, Leversa moved into new premises the environment of which corresponds the requirements of EU.

The merger has resulted in expansion of Leversa and its emergence among the top distribution companies in Latvia. 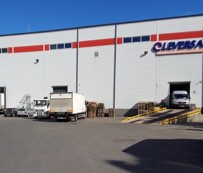